Interview: The Liberation of Algorithm

42Maru's ultimate goal is to move away from manual searches and reduce the time and cost of searching. It improves searcher convenience by providing only one clear answer. If AI automatically configures the algorithm from the beginning based on deep learning, technology developers can also reduce the effort required for initial setup.

There is a competition called 'SQuAD 2.0'. It is a contest where the computer reads and understands a given fingerprint like a person, and then competes for 'Machine Reading (MRC)' to find the correct answer. It is hosted by Stanford University, USA. Anyone can participate by posting their own algorithms online at any time. The ranking also goes up in real time. As it is a place where the skills are publicly verified, companies, universities, and research institutes, which are known in the field of artificial intelligence (AI), are participating.

In November 2018, a strange name “Forty-Two-Maru (42Maru)” was ranked with Google as the top team in the competition. More surprisingly, it is a two-year-old Korean startup.

What kind of company is it? That it was able to stand, shoulder to shoulder with a global technology giant such as Google? I visited the 42Maru office in Gwanak-gu, Seoul, and heard the secret.

D. K. Kim emphasized that predicting a completely different method of competition was effective. In previous competitions, it was a typical way to give specific fingerprints and find the right answer. On the other hand, the 2.0 competition gave fingerprints with no answers and used the algorithm as an evaluation criterion to find out whether the fingerprints have no answers.

"It is a technically difficult task to find out that there is no answer because the algorithm tends to give an answer unconditionally," said D.K. Kim.

There was another reason for the high predictive power. He is a developer who has been through EMPAS and SK Communications for over 20 years in search technology. As I worked from the early days of the internet in the 90s when the venture boom was in progress, I knew the history and development process of search technology better than anyone else.

MRC technology, after all, is the key to how valid the algorithm is to access the answer through search. So, D.K. Kim's career helped. It is also the background of the founding of 42Maru, which is developing search-based AI.

"I dream of a search technology without 'manual searching'"

42Maru is a startup that provides a 'Deep QA (Question Answering) platform' using MRC and 'Paraphrasing' technology. Deep QA is a technology that automatically finds one clear answer by introducing deep learning-based AI into search technology.

According to D.K. Kim's explanation, the existing search is a way to provide all documents or content corresponding to the correct answer rather than immediately telling the correct answer. It is because of the keyword search base. It only looks at how much the search keyword is in the document. Google search is no exception.

Naver and Daum are better at screening information than Google, but the limitations remain. There is an attempt to catalog one correct answer, but the initial setup (setting) must be done by a person. A lot of people have to come up with an algorithm to answer the question 'A to B'. It is too cumbersome to come up with the term “songoriism”.

"Google is a global service, so it deals with languages ​​of various countries," said D.K. Kim. "Because we can't afford to develop an automatic search algorithm that can be applied to multiple languages, we only maintained the basic search functions."

He continued, "Even if Naver or Daum Kakao are more advanced in search technology than Google, the basic algorithm settings are entrusted to humans, so there is a limit to service expansion."

42Maru focused on “Deep Learning” to overcome these limitations. In deep learning, AI learns large amounts of data and discovers meaningful patterns between data. This pattern is the source of algorithm development.

42Maru's ultimate goal is to move away from manual searches and reduce the time and cost of searching. It improves searcher convenience by providing only one clear information. If AI automatically configures the algorithm from the beginning based on deep learning, technology developers can also reduce the effort required for initial setup.

"Sulwoom, which was not recognized as a search, led to a start-up." "I thought the search function was the most beneficial internet function to help you find what you were looking for right away."

When asked why he was only engaged in the field of search technology, D.K. Kim responded. He is a search technology master who has worked on this field for over 20 years. After graduating from university and graduate school, majoring in Computing Vision (the basis of iris or fingerprint recognition technology), he started his first job at Empas.

As a military service exemption, he worked at Empas and entered the search technology development. It was at the time of the boom. Since it was in the early days of its founding, it was responsible for various tasks ranging from development of search technology to planning.

The same was true of SK Communications, which acquired Empas. Even after the organization grew, he oversaw search technology development, planning, marketing, and business. Recognized for his ability to perform his job, he became the head of the search business division in his mid 30s. It is an executive position that oversees all departments related to search technology.

It was a promotion 10 years earlier than others, but D.K. Kim soon was not satisfied with the company. He said, "Because I was in a big company, it was customary to play golf and drink alcohol frequently. The life that was promoted and supported by the organization didn't match the values I had."

Furthermore, his hard work on the search engine did not receive proper recognition. Although he received a prize and received his recognition, he couldn't beat Naver in search utilization due to the lack of content-based data.

SK Communications provided Cyworld service, but due to it consisting of personal data, it had limited use. All the while, Naver has provided various services such as blogs, cafes, etc., and easily collected data and contents to lead the search function.

"It was difficult to jump into a new search business as a start-up because I saw that the neighborhood (Naver, etc.), who is doing business well, succeeded by manual searches rather than through the technology of analysing large groups of people," said D.K. Kim. "I think that it was a worthy fight to keep venturing into deep learning, so I jumped in."

The appearance of D.K. Kim, who conducts an interview with a reporter from IT Chosun. / Reporter Kim Pyung-hwa

42Maru tries to meld Deep QA technology into various industries. The company explains that it can be used for corporate intranets, chatbots, and smart speakers. 42Maru's technology was introduced in 'Kids Watch', a children's smart watch for LG U +.

KT also installed the company's technology on the AI ​​platform 'GiGA Genie'. When a user asks a knowledge based question, it serves as a way to present a single answer through Deep QA. Because it is a voice-based question-and-answer system, it is not possible to list various information like a search portal.

Recently, it also cooperated with Daewoo Shipbuilding & Marine Engineering. Because the internal data of the company is vast, it was difficult to process work through search. Previously, searching for a specific keyword resulted in multiple listings. Now, Deep QA has been introduced, and only certain correct answers have been provided to significantly reduce business hours.

42Maru's next challenge is directed at the heart of Europe.

42Maru received investment from Naver-based venture capital (VC) Spring Camp in 2017, and from Europe's famous accelerator techstars in 2018. At the end of this year, it will also promote investment in Series A rounds. In Korea, there is no precedent for attracting investments at that scale, but the goal is to achieve results based on high technology.

D.K. Kim announced his plan to enter the European market with a technology base in Korea. In order to develop original technology in Korea, overseas local development personnel were also brought to the head office.

In Europe, it plans to provide search technology to the business-to-business (B2B) market with a cloud-based “service-as-a-service (SaaS)” model. SaaS is a method in which the user pays the manufacturer as much as using the software.

D.K. Kim replied, "The reason I chose Europe as a business market abroad, among other things, is because the AI potential is greater than the United States." Unlike the United States, which already has the technology capable of developing and commercializing applications in Silicon Valley, Europe is lagging behind despite the availability of strong source technology.

In particular, the UK focuses on AI in both government and private sectors. The UK government has steadily invested in AI technology. Significant AI research continues at Oxford University, UK. Deep Mind, who developed AlphaGo, is also in the United Kingdom.

The reason SaaS was settled is also why Europe was chosen. Building a system with SaaS can provide remote services without having a local branch building. It also has the advantage of running the company with minimal manpower.

As such, 42Maru established a subsidiary in the UK in March, aiming for a full-fledged market penetration.

“Senior Startup” has a unique sense of mission

42Maru dreams of entering into Europe with Deep QA technology and becoming a unicorn in the B2B market. Many companies have preoccupied the English-speaking B2C (Business to Customer) market in the search technology ecosystem. The aim is to aim at the new blue ocean, the European-based B2B market.

Of course, it is not an easy challenge. Unlike English speaking countries, Europe has different languages. Development of search algorithms requires considerable technical skills. After grasping the basics of grammar for each language, it is necessary to develop new algorithms, which is expensive.

D.K. Kim was confident that he could overcome this difficulty. "If you build your learning data well, AI can take care of it and learn new languages ​​based on deep learning," he said.

There is also a desire to make a success story of a late starter startup. "I feel the mission as a senior startup with not only me but also a large number of developers in our company in their 40s," he said. Then, is the number '42' in the company name the average age of employees? It was not. It was taken from the British writer Douglas Adams' science fiction novel, The Hitchhiker's Guide to the Galaxy.

D.K. Kim added, "I would like 42Maru to be a unicorn, but even if it is not, I think it will be a valuable challenge if it is a good example for a young start-up that would follow our experience." 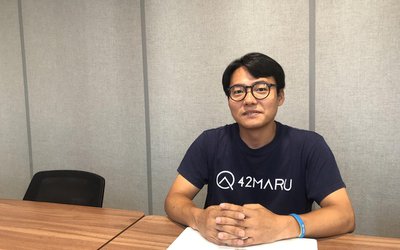 [Press release] We can perform the Liberation of Algorithm that neither Google nor Naver could.jpg 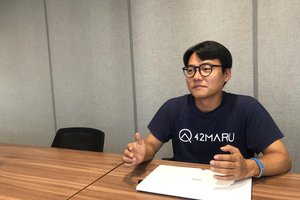 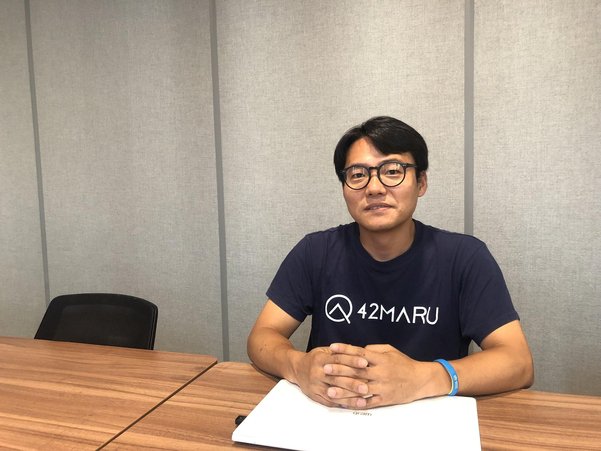 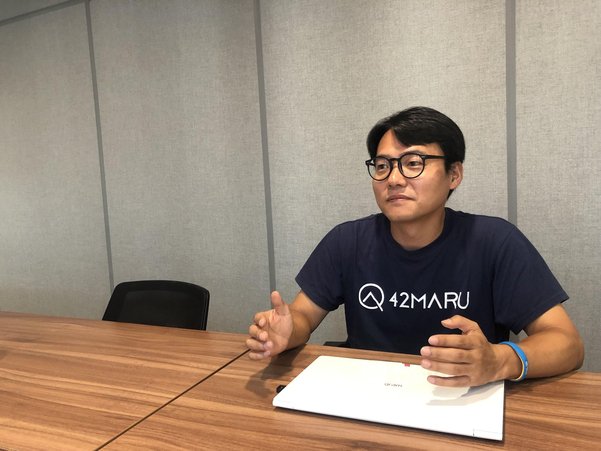