Starting from 2011, the 17th KB Good Job Job Fair, is the single largest job fair in Korea with a total of 317,000 visitors. Originally, an offline on-site exhibition was planned, however due to the social distancing rules set by the government, it will be held as a non-face-to-face online job fair instead.

This year, the scale has been expanded, from about 200 participating companies, to 300 companies. Participating companies are provided with the same recruitment support and preferential interest rate benefits as those of the existing field fair participation. It will be held for two weeks from June 1st to 12th, and can be participated at anytime, anywhere through a mobile app dedicated to PC and KB Good Job.

42Maru is an artificial intelligence startup that develops and services a deep semantic QA (Question Answering) platform that accurately understands the intentions of users’ queries and derives only one “right answer” from a set of massive unstructured data. The SaaS-based AI platform can be used in various industries using deep learning-based “natural language understanding (NLU)”, “paraphrasing” that detects and expands similar expressions, and “MRC” that is unique.

Through this KB Good Job recruitment event, 42Maru plans to recruit talents from various fields such as artificial intelligence QA development engineers, artificial intelligence-based knowledge service planners, and domestic and overseas business development personnel, and is scheduled for June 29 to 30 It will also participate in the “SSAFY Job Fair” hosted by the multi-campus to secure excellent software talent.

“42Maru is expanding its business field in artificial intelligence-related fields with its unique technology recognized in various industries,” said Dong-Hwan Kim, CEO of 42Maru. In addition, we hope that it will also help vitalize the frozen job market by hiring talented people who are interested in integrating artificial intelligence technology into the financial field. 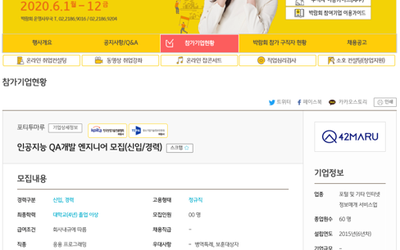 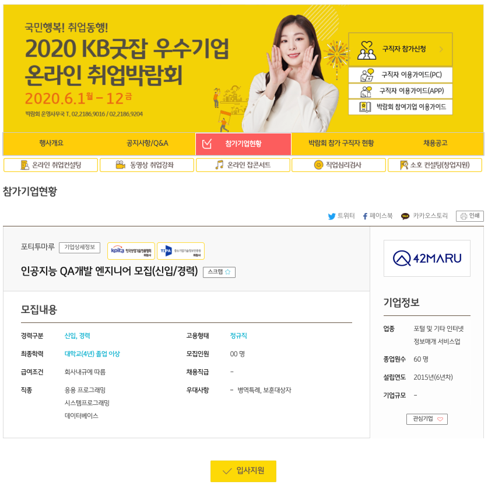